Ken Kolsbun is the author of five books. Peace: The Biography of a Symbol was published by National Geographic in 2008. Two of his other books, My Journey Aboard the Peace Train and Moving Signs of the Time: The Amazing Art of VW Bugs, Buses and Other Vehicles of the 60s and 70s are in the proposal stages.  Discovering Santa Barbara… Without a Car, a book that includes histories, resources and maps was funded by the City of Santa Barbara. Lumpy Bumpy – The Speedster Boy is a children’s book in the form of a poem by Jannice and Ken Kolsbun.  Inquiries are welcome. Agents and publishers please contact Ken here.

Peace: The Biography of a Symbol

“As the boomer generation moves onward through the milestones of life, 1960s nostalgia holds tremendous meaning today. And nothing more eloquently symbolizes the counterculture era than the peace sign. How did this simple sketch become so powerful an image? Peace: The Biography of a Symbol tells the surprising story of the sign in words and pictures, from its origins in the nuclear disarmament efforts of the late 1950s to its adoption by the antiwar movement of the 1960s, through its stint as a mass-marketed commodity and its enduring relevance now. As the symbol’s popularity blossomed, so did an entire generation, and author Ken Kolsbun’s expertly selected images-from his own collections as well as a variety of historical archives-illustrate both the sign itself and the larger history that it helped to shape. Along the way, the book recounts the controversy inspired by the peace symbol, bringing to light several trials that challenged its very existence. Drawing on exclusive archival interviews with Gerald Holtom, the late creator of the symbol, Peace recounts its birth and goes on to build a historic portrait using both iconic and rarely seen photographs… Peace will also capture fans of symbology, art, and history.” – from Amazon.com

Peace: The Biography of a Symbol is available at Amazon.com

Jan Selby, of Quiet Island Films, created a documentary about Ken’s work on the peace symbol, titled A Circle and Three Lines. “In A CIRCLE AND THREE LINES (10:46), Ken Kolsbun, author of Peace, The Biography of a Symbol, explains its rarely known history. Following its path from a march in England through the turbulent 1960s to today, Ken explains the numerous meanings of and controversies surrounding this memorable symbol. People of all countries, races, and religions have been inspired by the peace symbol, using it to express hope and the desire for change. Now that it is everywhere, how many people know its original meaning? A CIRCLE AND THREE LINES challenges us to think about how we use the peace symbol, its future and our responsibility to protect it, as well as our planet.” – From Quiet Island Films 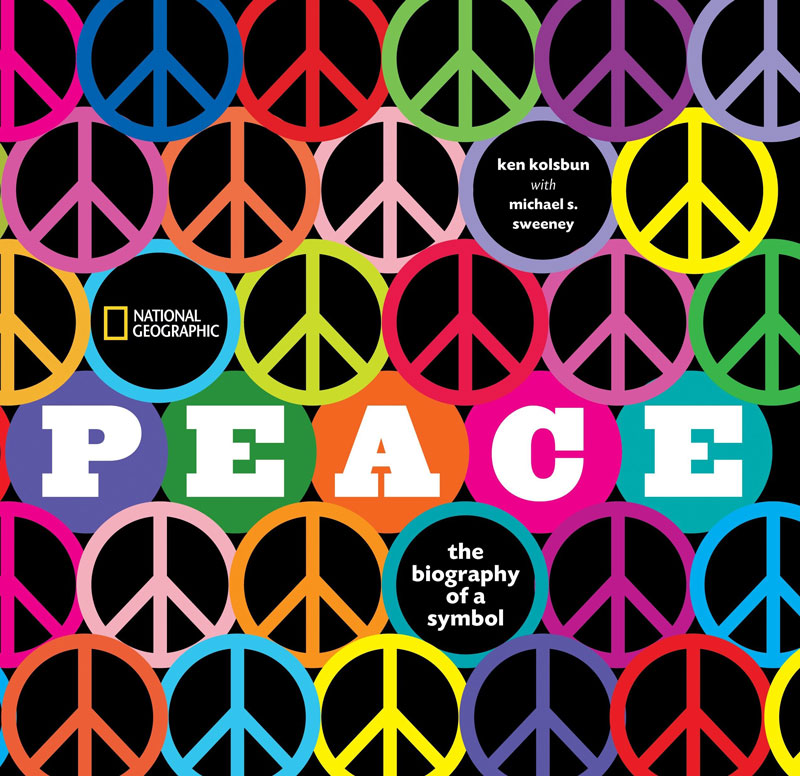 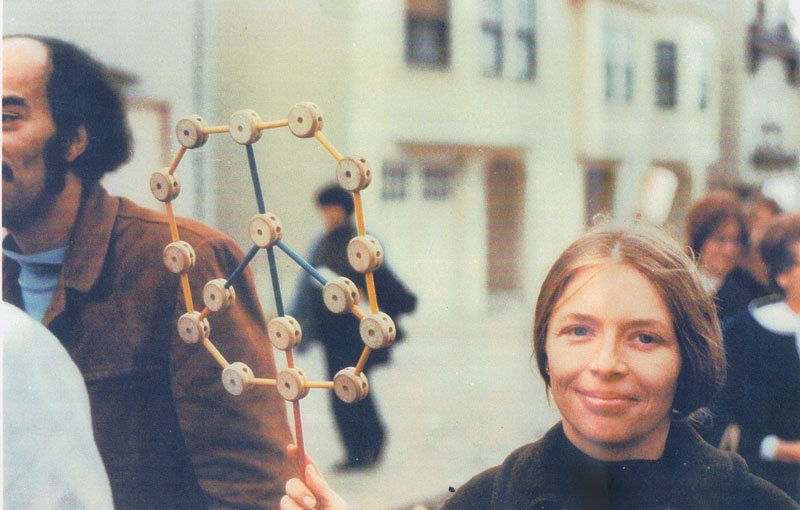 My Journey Aboard the Peace Train

Author Robert Cooney (Winning the Vote: The Triumph of the American Woman Suffrage Movement) wrote:
“Only author Ken Kolsbun could tell this story. The peace symbol is sacred to him because it represents not only peace, nuclear, and unilateral disarmament, but also his hope for a better world. He wrote this book about his extraordinary endeavors and personal peace-oriented journey. Engaging period photographs, documented by the author, complement a story reflecting the heart of Ken’s early history, creating a compelling read.”

My seminal work on the peace symbol, Peace: The Biography of a Symbol was published by National Geographic in 2008 in celebration of the symbol’s 50th anniversary. That book provided a brief overview of the symbol’s history. By contrast My Journey Aboard the Peace Train is the lifetime journey of a peace activist, from the 1960s until the present. It includes poignant stories and demonstrates the impact of the Peace Symbol in religion, business, politics, the arts and the law.

Experiences of my early childhood, young and later adult years all contributed to my lifelong desire for peace, nonviolence and cooperation. Those events are woven throughout this book’s story and serve as my autobiography. My fascination with the peace symbol, and all it connotes, historically, culturally – even commercially – is woven throughout my life, and is the thread that runs through My Journey Aboard the Peace Train.

This entertaining personal narrative, accompanied by photographs and drawings, introduces the reader to a more thorough account of Gerald Holtom, creator of the Peace Symbol, with whom I was fortunate to have a long-distance mentor relationship. Holtom was a conscientious objector and an astute political activist, who understood the perils of the atom bomb. In his country workshop, just outside of London, he created the first peace symbol for a Ban the Bomb demonstration in 1958. This book provides a history of Holtom and the peace symbol. 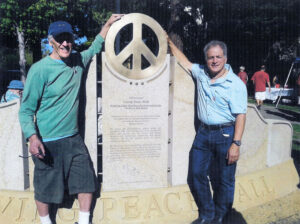 From its origins, the peace symbol has evolved into a cultural icon that contains many meanings. In its early inception as a symbol of protest, and ubiquitous during the VietNam war years, it has represented  to some, evil, and has certainly transformed into a popular symbol of the colorful energy of the “peace generation” of the 60s and 70s. It has been often been co-opted for marketing purposes. It is resonant as a post-modern idea, making multiple meanings for people for the last 70 years.  Thus the peace symbol forms a lens through which to view a significant part of American history, and is a token for my own life-long peace activism. 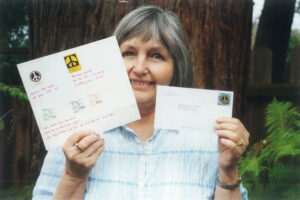 My focus on the peace symbol and peace activism is reflected in many photographs, taken during the last 60 years, which are published herein for the first time. My search for peace symbols to photograph was a family adventure, with the participation of my wife, Jannice, and our three daughter as they were growing up. Jannice is the photographer for some of the photos in the book, and my daughter’s helpful “where’s waldo” searches for the peace symbol are represented, as well. Other photos are with the permission of organizations, and news service professionals, who chronicled notable events in the arena of protest and peace activism. These photos will add to the reader’s understanding and underscore the relevance of Holtom’s iconic symbol, its potency as a cultural symbol, and its relevance to an important chapter in American history. 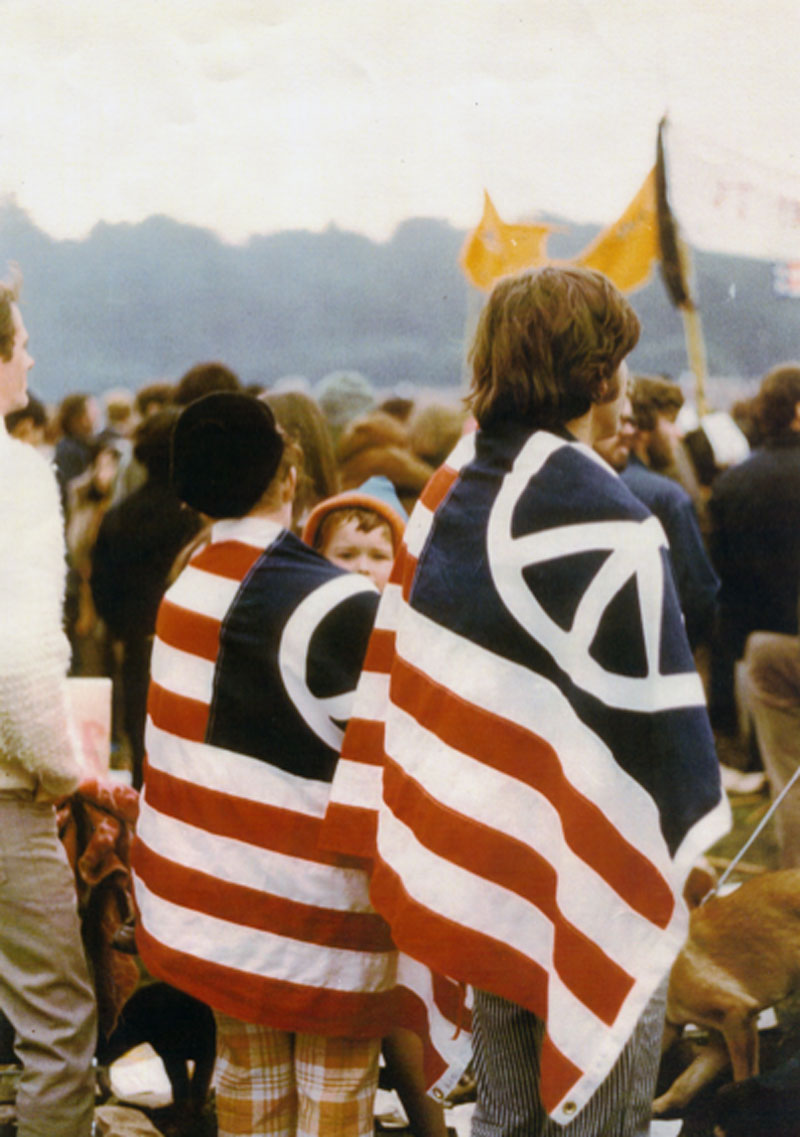 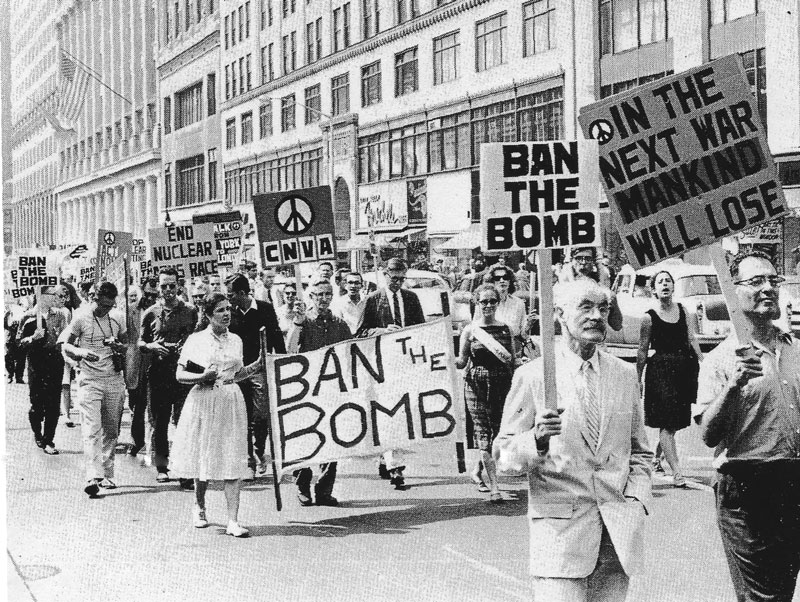 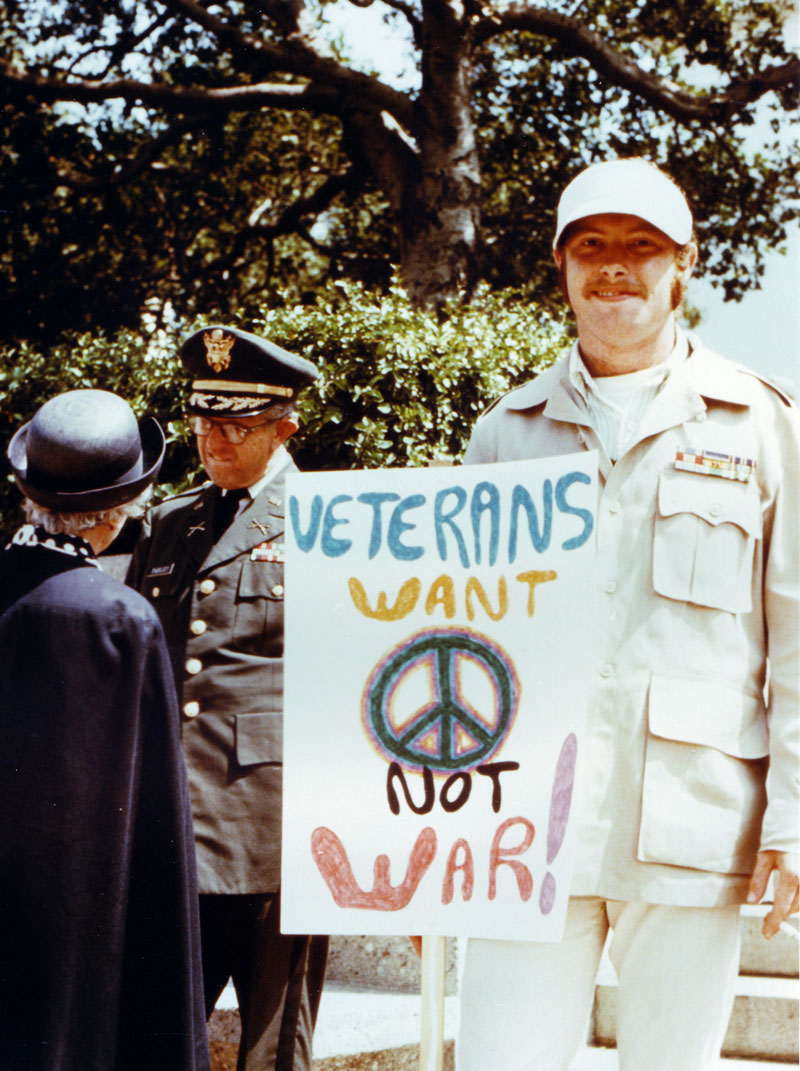 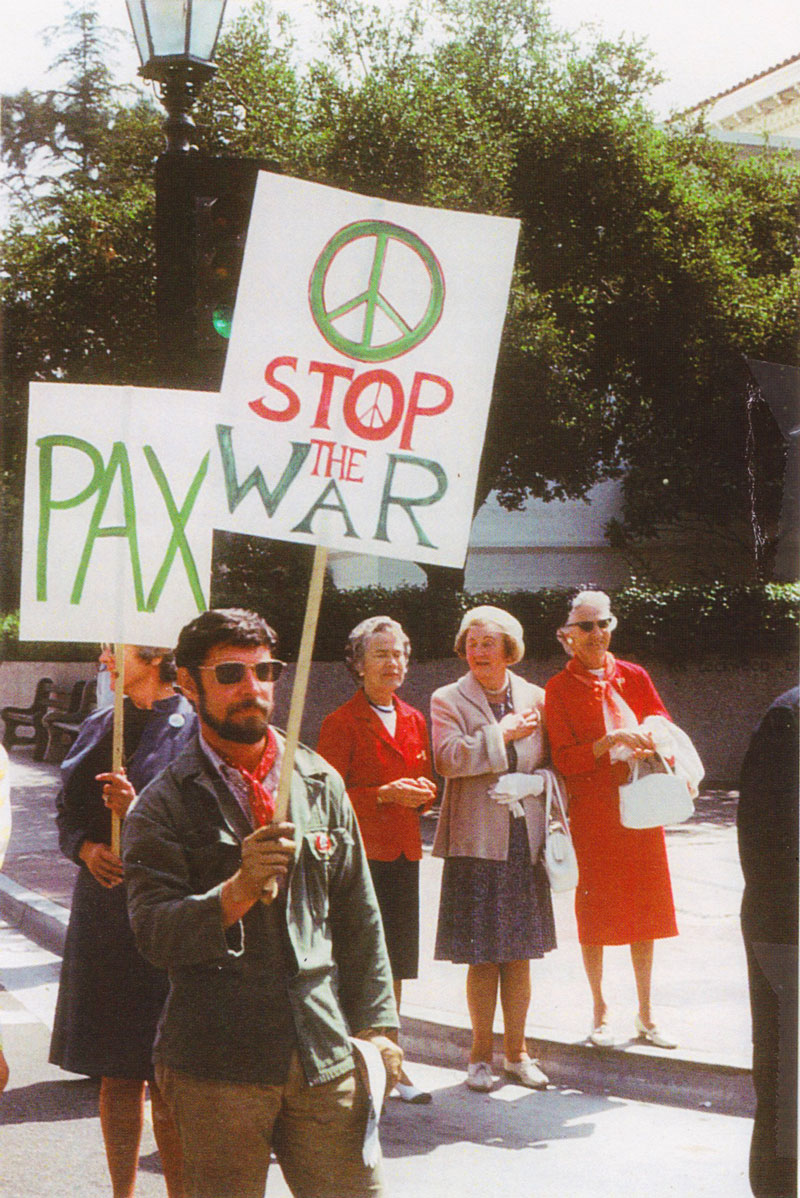 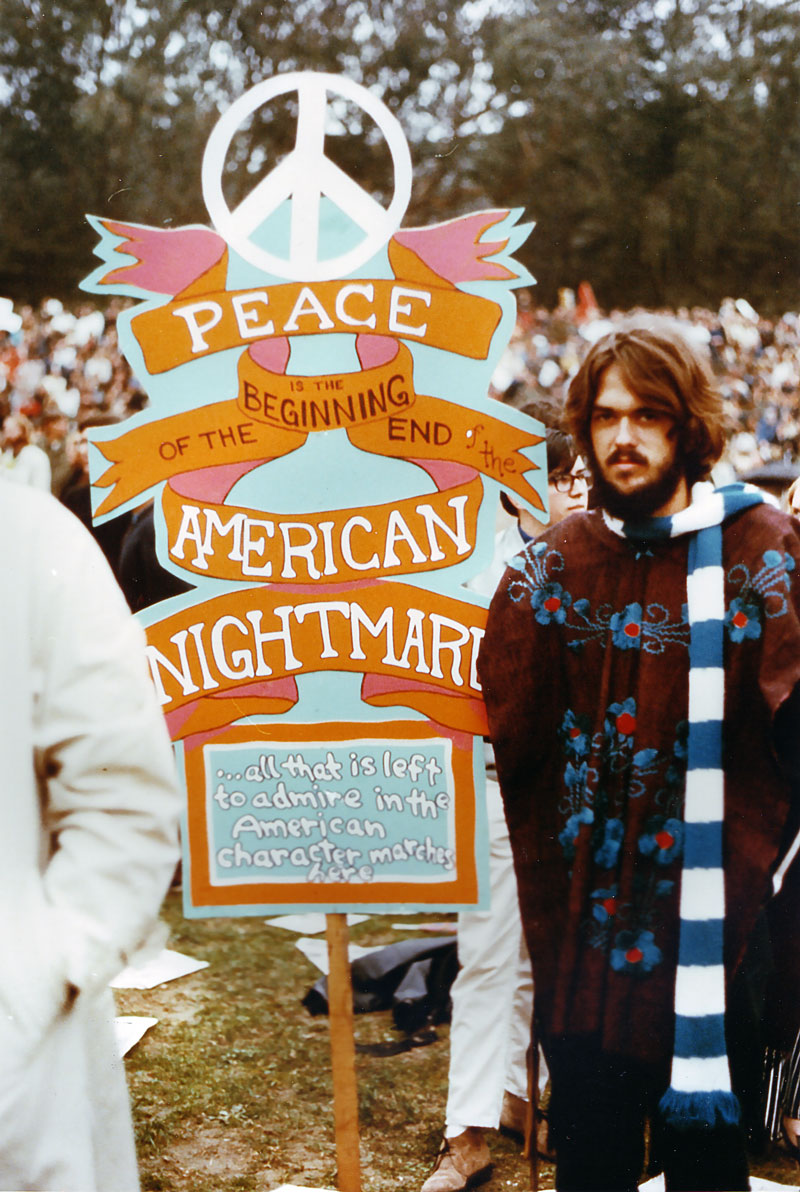 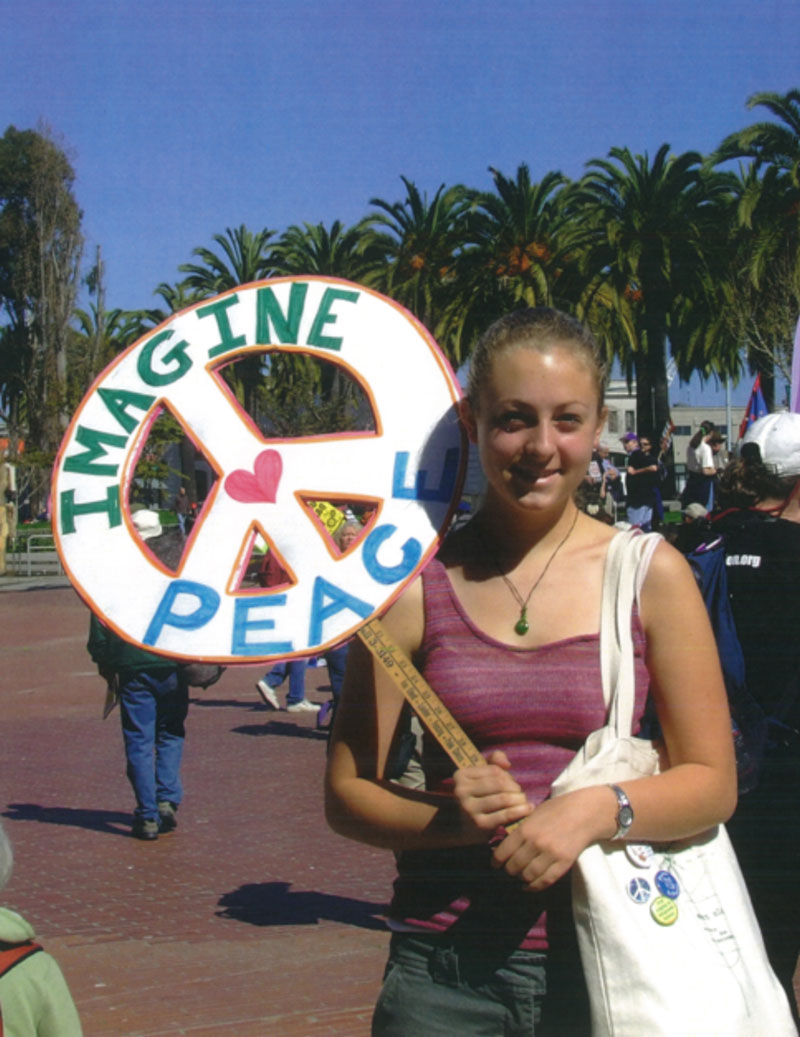 Moving Signs of the Time: The Amazing Art of VW Bugs, Buses and Other Vehicles of the ’60s and ’70s

It was an eye-catching decade of a moving whimsical art show on wheels in California, offering messages of peace, love and hope. In its beginning, this ‘folk-like’ art was painted on VW Bugs and VW Buses by hippies and soon followed by college students and artists opposing the emerging Vietnam War.

In the early 1960s, hippies started a ‘movement’ of cultural dissent, living simple lives, favoring personal freedom, becoming vegetarians, opposing the Vietnam War, experimenting with drugs, and embracing a new form of ‘art’ and music to express their beliefs as did college students and artists. Many young people shunned traditional dress and the establishment’s ‘Big Cars’ – found the VW Bus and tiny VW Bug fulfilled their basic needs, and soon began to ‘dress them up’, painting their vehicles with bright colors and peace symbols – the new anti-nuke, anti-war symbol, which recently arrived from England. Eventually, these vibrant images would also be seen on delivery vans, pickup trucks, old Chevys and Fords, and even old school buses.

As a landscape architect and budding photojournalist, I captured these vehicles with 35mm color film, during my ongoing research on the history of the peace symbol, which resulted in our book, Peace: The Biography of a Symbol, National Geographic c 2008. These photographs, taken five decades ago, reveal young peoples’ love of VW Bugs and Buses. The newly colored vehicles were a real eye-opener and added a sparkle of joy to the roadway landscape.

Those photos have been collected into an 85-page book proposal titled Moving Signs of the Time: The Amazing Art of VW Bugs, Buses and Other Vehicles of the ’60s and’70s (including a Foreword and Commentary). This is a cheerful, one-of-a-kind ‘American Time Capsule’ book. Art museums might carry it as a coffee table book, and past and present VW Bug and VW Bus owners would relish it with joy. 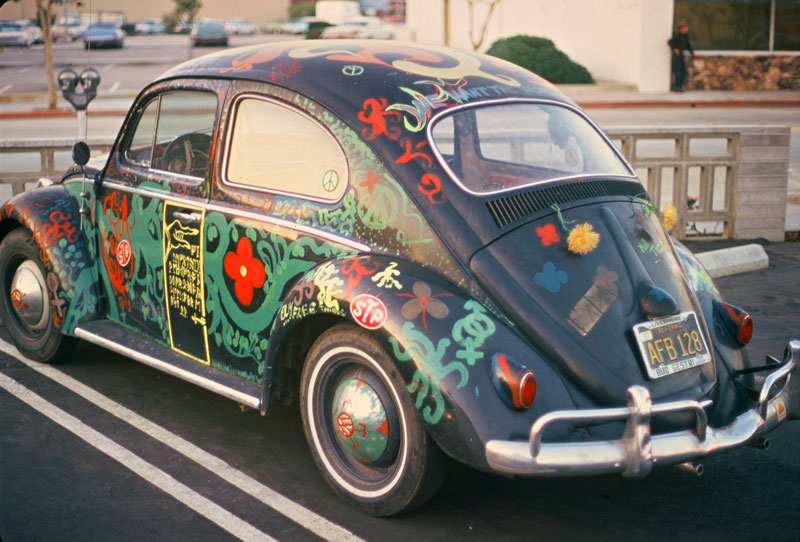 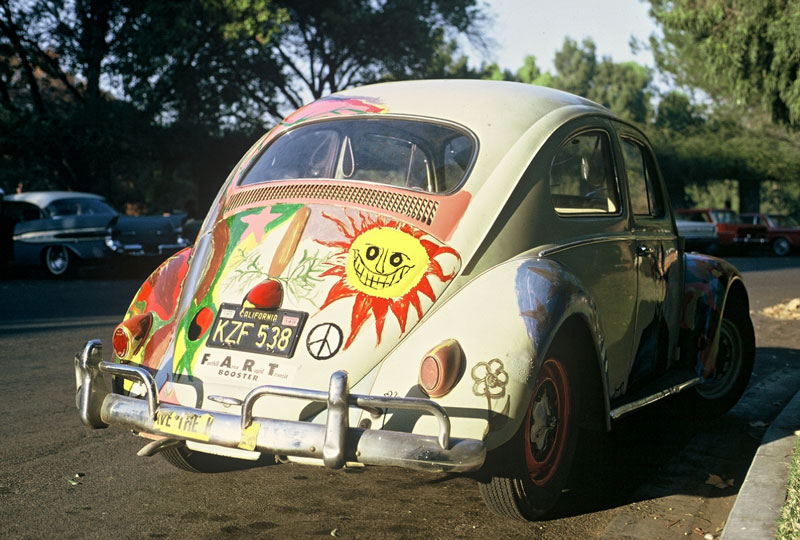 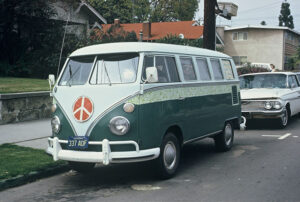 Discovering Santa Barbara Without a Car

In 1974, as a project of “Friends for Bikecology”  Discovering Santa Barbara.. Without a Car: A guide for people using bicycles, buses, the train, horses or walking was designed and published (Ken Kolsbun and Bob Burgess).

This is an extensive booklet that includes histories, resources and maps. “(The writers) were motivated to put this information together for several reasons. Principal among these was our feeling that residents and visitors were overlooking many attractions and resources with which the community is so well endowed. When we sought to find out why, we discovered our old nemesis, the car, was the main reason. The socio-environmental-economic disadvantages of the automobile and its adverse effect on a community all come into play.”

The project was funded by the Santa Barbara City Council. You can purchase the booklet from Amazon.

“Friends for Bikecology” was recognized and supported by numerous public figures including David Brower (first Executive Director of the Sierra Club and founder of Earth Island Institute), Alan Cranston (U.S. Senator) and Stewart Udall (Secretary of the Interior, 1961 – 1969).

A Children’s Book by Ken and Jannice Kolsbun

In this delightful and eventful book, rhymes relay the message of Lumpy Bumpy who just couldn’t go slow. His name gives away his looks. It took him time to discover why he was covered in bumps. This book can be comforting reading for a child after getting a bump…(keep a band-aid nearby).

This little speedster,
ran with great ease.
Bumpy just loved,
the feel of the breeze.

When Bumpy takes off,
dust flies off the trail.
Fast as a roadrunner,
he sprints past a snail.

Lumpy Bumpy – The Speedster Boy was self-published in 2015. 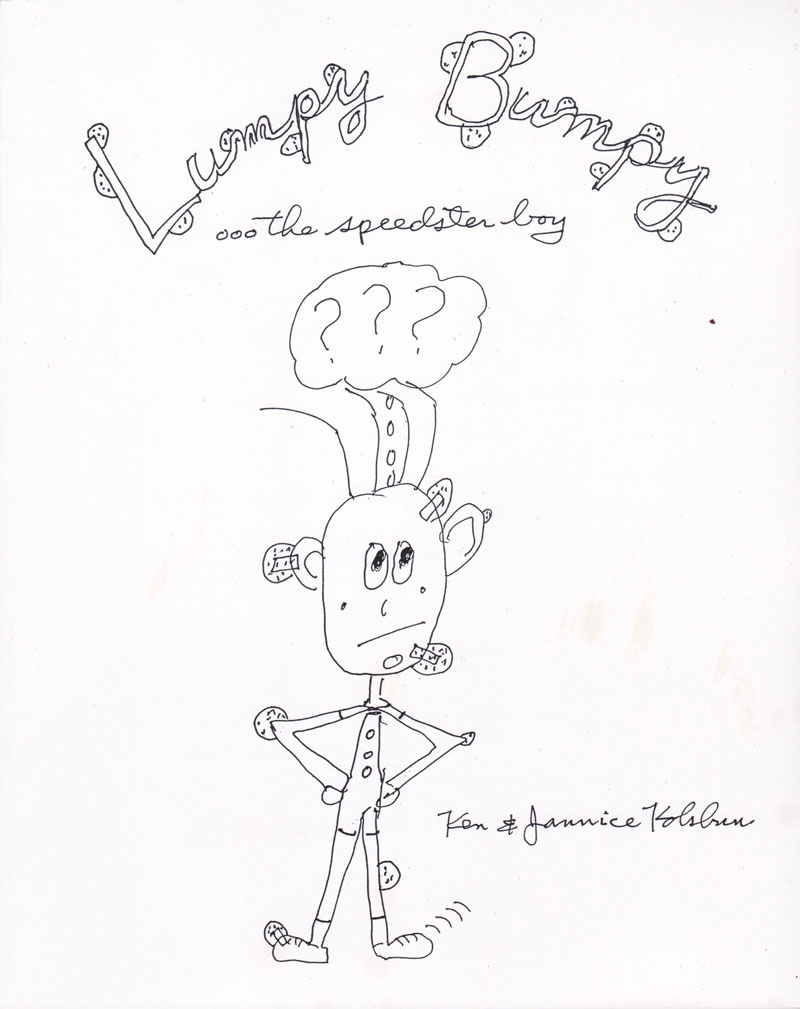